De all the writings of historians and codes of travelers and visitors views.There is no, almost, from the books of the city of Sanaa without mention to the wall 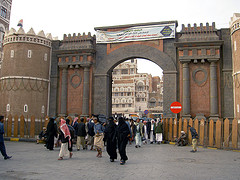